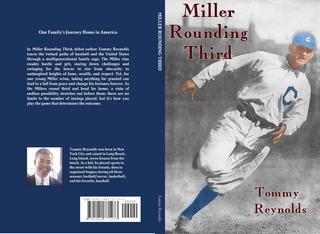 It all started with Liam Miller, a sainted yet simple man. He was born in the seaside village of Wicklow, on the Southeastern shore of Ireland, approximately 50 miles down the coast from Dublin. The family moved to Ballinalee, County Longford when he was three-and-a-half-years old. Rumor has it the farming was better, and the lands were larger. One could get plain old “more for your money.” An idea that has motivated many a man throughout time.

His father, Peter Miller, was born and raised in Wicklow. As far as he or anyone knew, since records predating his assumed birth in 1690 are not that easy to come by, it is thought and agreed by many the Millers originated in Wicklow. Since when, and for how long? That’s a tough nut to crack. Even Columbo might have a hard time figuring that one out. If one was to ask around, “as long as we all can remember” is the response most likely to be heard throughout the pubs of Wicklow.

Moving his family to County Longford worked out fantastically for Peter Miller. So much so, he became the Mayor Daly of his time, minus the alleged corruption of course. Since the records from that period, as they were, are a bit tough to come by, and the term graft has been associated with “one or two” Irishmen over the years, the record will be left to say Peter Miller’s source of popularity was that he was well-liked.
Either way, or any way you slice it, he was successful. Wildly so. His success was most likely due to the Irish charm coursing through his veins, which has had many a meaning across the years. Feel free to come up with your own definition, dear reader.

Although the not yet invented term graft may have pole-vaulted him to his ultimate success, to the plateau that became the epitaph on his grave, he did start out quite the honest man. As Andy Dufresne poignantly remarked in Shawshank Redemption; “It took going to prison to turn me into a dishonest man.” It just may have taken Peter Miller becoming an elected official to turn him into not quite as upfront a man as he was when he first breathed the air of this great planet. But this tale is not being written to condemn politics and those who practice it so wisely, for we might then run out of paper. That’s a subject best left to some other noble scribe.

Peter came to County Longford without many Irish pounds to his name. He worked hard cultivating his fields. His determination, especially after two near bankruptcies by the age of thirty, steeled his character. It is said a man is born with a certain amount of traits, and that is that. The thought being, character can be developed to a certain extent to a pre-ordained level. Well, that is one school of thought.

The other side of the coin proclaims a man is born with certain strengths and foibles, but the positives can be made greater and the weaknesses can be diminished, if not entirely erased. The classic ”nature vs. nurture“ argument, or some combination thereof.

It is this latter theory, more so than the former, that describes the person of Peter Miller. He certainly was not born as, nor did he grow up to be, the biggest kid in Wicklow. Standing a robust but stout 5’ 7”, Peter was as tough as they came. A large majority of the Millers were, in fact, first in line as the class headed down the center aisle for their First Holy Communion.

Thus began a long line of vertically-challenged Millers, which, of course, would not at all get in the way of them achieving great things. Despite being a tad short, he developed into quite a lad, and a strong man to boot. After unsuccessfully trying to grow both carrots and tomatoes in Wicklow (i.e.: the two aforementioned near bankruptcies), and the near loss of his farm, Peter decided to change course. The changing of said course kept him amongst the green fields of Erin, but did lead him to a new town in a new county.

The benefits to the U.S. economy when foreign companies invert to American companies if the U.S. lowers its corporate income tax rate.

The parallels of the struggles and growth of baseball and America.

License of the Soul
Two recent divorcees meet online and a whirlwind romance blooms through their strong faith.